Martinique Under Curfew After Looting 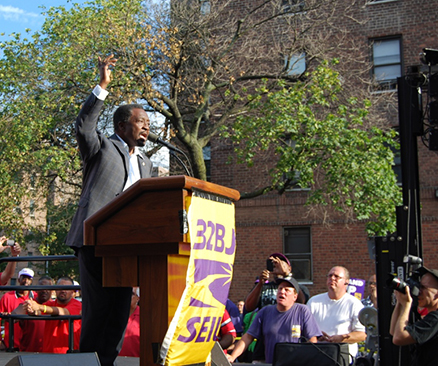 3 weeks ago·3 min read
ShareTweetPinShare
Home
Caribbean News
10 Things To Know About The Man Nominated To Be The US’ Ambassador To Jamaica
The content originally appeared on: News Americas Now
The Joe Biden administration has nominated Jamaican-born NY Assembly member Nick Perry to be the next US ambassador to Jamaica.

1: Perry was born and raised in Saint Andrew Parish in Jamaica. The fourth of five sons in a family of eleven children, he completed his secondary education at Kingston College (H.S.) where he attended on a full scholarship and went on to work at the Bustamante Industrial Trade Union.

2: In 1971, he immigrated to the US and the following year he volunteered for the United States Army, from which he was honorably discharged at the rank of Specialist Five in 1978 after having served as an active-duty serviceman for two years and inactive reserve for four years. He is the recipient of several service medals and was honorably discharged with the rank of Specialist E-5.

3: After serving in the army, Perry attended college on the G.I. (Government Issued) Bill and earned a Bachelor of Arts in political science and a Master of Arts in Public Policy from Brooklyn College.

4: In 1983, Perry was appointed as a member of Brooklyn Community Board 17. He later served as chairman of that board-and the following year he ran as a candidate for District Leader in the 42nd Assembly District. He would later serve as a member of the Executive Board of the 67th Police Precinct and as a director of Flatbush East Community Development Corporation.

5: In 1992, following the 1990 Census, a new assembly district was added in Brooklyn, located in East Flatbush. Perry won new 58th district seat in the November 1992 election.

6: Since 2001, Perry has been the vice-chair of the Assembly Majority Conference and majority whip. He also serves on the New York State Assembly Committees on Ways & Means, Rules, Codes, Labor, Transportation and Banks and has served as Assistant Speaker Pro Tempore, Deputy Majority Leader, and Assistant Majority Leader. Perry ran uncontested in his 2008, 2010 and 2012 general elections for State Assembly. In 2006, Perry declared his candidacy for New York’s 11th congressional district, which was being vacated by retiring Congressman Major Owens. In May 2006, he withdrew from the congressional race and endorsed eventual leader Yvette Clarke.

Over 56,000 Haitian Migrants Have Trekked Through The Darien Gap This Year

9: In commenting on the appointment, he told CMC: “I thank President Biden for this opportunity to serve as ambassador for this great nation. I know this would not have happened without the steadfast support of Senate Leader Chuck Schumer and others in New York’s Congressional delegation. So, as I express my appreciation, I also take this opportunity to promise to serve with the highest integrity, and always in the best interests of our country and our president should I be confirmed by the US Senate.”

10: Perry, 71, and his wife Joyce reside in the East Flatbush neighborhood of Brooklyn. His granddaughter is Roc Nation recording artist, Justine Skye.