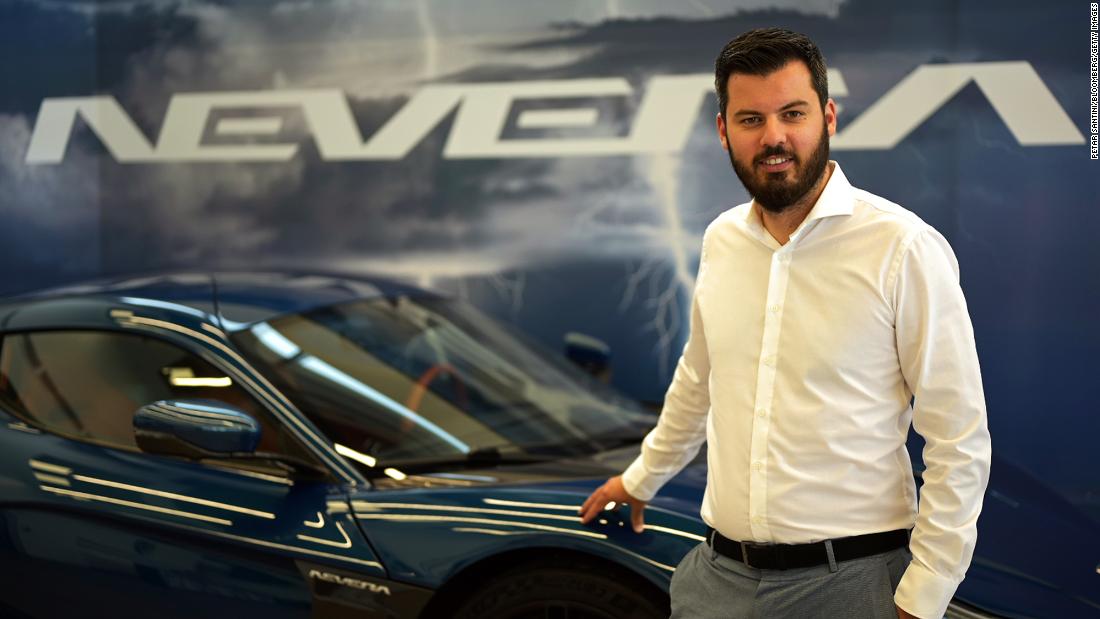 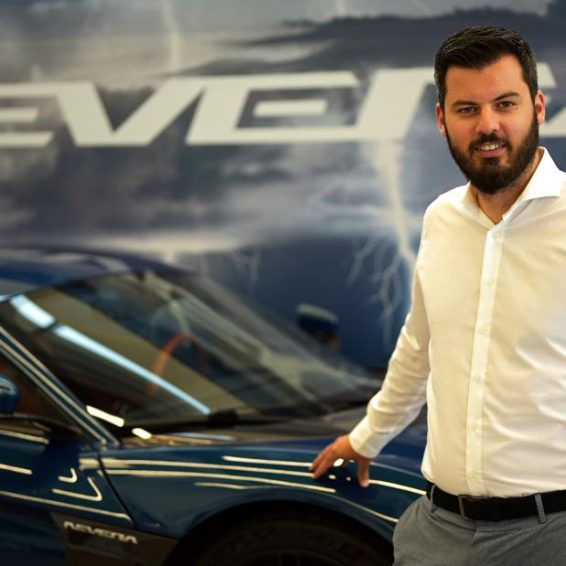 Bugatti is the jewel in Volkswagen’s crown. This 33-year-old is taking it over

2 months ago·7 min read
ShareTweetPinShare
Home
World News
Bugatti is the jewel in Volkswagen’s crown. This 33-year-old is taking it over
The content originally appeared on: CNN
The man now taking the wheel at Bugatti is Mate Rimac, a 33-year-old Bosnian-born engineering prodigy — and one who harbors no illusions about the challenges facing his industry.
Famous today for some of the world’s biggest and powerful gasoline engines ever put into a road car, Bugatti had been reborn in 2003 as the jewel in the crown of the Volkswagen Group. Besides VW, the global automaker’s other brands include Audi, Porsche, Lamborghini and Bentley.
Ever since, Bugatti has been a technological showcase for the company, pushing the limits of what engineers and customers thought possible. A car that could top 250 miles per hour? No problem. One that can do 300? Sure, as long as you’ve got the nearly $4 million it costs. And all that performance comes wrapped in an elegantly designed, carefully handcrafted body custom-made from expensive materials.
But enormous engines fueled by petroleum products are no longer technological wonders. They’re old school. And in 2021, Bugatti needs to finally enter the age of electric vehicles.
Read More
Enter Mate Rimac, who in 2009 founded Rimac Automoblili, a Croatian startup making the 1,900 horsepower Rimac Nevera electric supercar. The genius of high-wattage performance had already grabbed headlines fresh out of high school and he’s attracted the industry’s attention ever since.
In July, Bugatti merged with Rimac Automobili — creating Bugatti-Rimac, and transferring majority ownership of VW’s luxury performance icon from one of the world’s largest automakers to a small startup in the process.

‘Why was nobody using [this] to make cars fun and exciting?’

For an auto industry CEO, 33-year-old Rimac is on the youthful side, and he looks even younger thanks to his dark brown hair and beard. (His first name is pronounced like “matzoh” without the Z — Maht-teh — while his last name, and the company’s, is pronounced Ree-mahts with a slightly rolled R.)
Rimac has had an incredible and rapid journey to such a vaunted position. It began when Rimac blew up the engine in a BMW while racing the car in his late teens: Instead of just fixing it, he decided to turn the BMW into an electric race car.
This was long before Tesla was selling high-performance family sedans, let alone becoming one of the most valuable companies in the world. By then, Rimac’s family had left what was then Yugoslavia — today the place he was born is in the country of Bosnia and Herzegovina — and had spent about a decade in Germany before returning to the former Yugoslavia. This time, the family lived in the newly independent nation of Croatia.
“Because I was in Croatia, I read a lot about Nikola Tesla, who was also born in Croatia. Nikola Tesla had invented the electric motor 160 years ago that we use now everywhere and I was wondering,” he said, “this perfect machine that Nikola Tesla has invented, why was nobody using it to make cars fun and exciting?”
His electric BMW, dubbed the Green Monster, went on to set records and garner media attention. But Rimac quickly realized putting electric motors into old cars wasn’t a viable business for the long term. Instead, he decided he would engineer his own high-performance electric cars from the outset.
Rimac was just out of high school at the time. He attended VERN’ University of Applied Science in Zagreb but never graduated.
“I had to learn everything from scratch, which was pretty difficult here without mentors and the supporting industry,” he said. “Lots I had to learn the hard way.”
Rimac didn’t have big investors to bankroll his idea, so while he and his first employees worked on that electric supercar, he also took on projects from established companies. Various automakers were looking to create electric and hybrid cars, and Rimac’s clear understanding of the technology was valuable to them.
That part of the business — selling EV technologies to other firms — became the firm’s greatest source of actual income and was the reason Rimac Automobili was profitable almost from the start, Rimac says.
Now that line of work has been spun off into a separate company he also runs, called Rimac Technology. That firm will continue developing new electric vehicle technologies for other automakers.
“First, it was companies you didn’t hear about,” he said, “and then starting to work for small carmakers like Koenigsegg, and then Aston Martin, and then to the bigger ones like Renault.”
Actually, most consumers might not have heard of Koenigsegg, either, but the Swedish maker of multi-million-dollar gasoline-fueled supercars is considered another bold innovator. And its founder and CEO, Christian von Koenigsegg, has been a mentor to Mate Rimac, as well as a Rimac customer.
“I met Mate when he came to the Geneva Motor Show as a 17-year-old and asked me, ‘I want to build cars. I want to build electric cars. How do I do it?” Koenigsegg said. “So I kind of became his mentor.”
The relationship continues today and the two speak regularly, Rimac said.
Two major automakers, Hyundai and Porsche, became big investors in Rimac Automobili. Neither would discuss their work with Rimac with CNN Business. Porsche, though, was instrumental in bringing together RImac and Porsche’s sister brand Bugatti. Porsche now owns 45% of Bugatti-Rimac.

A day with Mate Rimac

It’s normal to hear entrepreneurs in the electric car industry go on about the global importance of what they’re doing. Things aren’t that simple with Mate Rimac.
Conversations with Rimac can result in a sort of cognitive whiplash. He loves cars, obviously. But it’s like talking to a baker who keeps going on about the dangers of consuming too much refined sugar and carbohydrates — and then pointing out that, really, cake is delicious.
“Cars are actually the culmination of all human disciplines,” he said. “It has to be beautiful. It has to smell well. It has to sound well. Everything, all the senses work with the car, all the material sciences, software simulations, fluid dynamics. Everything is in the car, everything humanity knows.”
But, in the long run, none of it really matters much.
“I don’t like this bull—-,” he said in an earlier conversation about the hype surrounding the supercar industry. “Let’s call things what they are, right? It’s making beautiful machines for putting them on a wall and that’s it.”
There was no deep disgust in his voice. He said it as if he were just stating a plain fact.
We were sitting off to one side at The Quail, one of the major events during Monterey Car Week in California. Wealthy auto enthusiasts were checking out beautiful classic cars parked on neatly trimmed grass. Also on display were the latest models from brands like Lamborghini, Lotus, Bentley and Pininfarina, a company selling its own electric supercar with Rimac engineering. The Rimac Nevera was sitting right next to us.
Of cars like the Nevera, Rimac said, “big picture, you zoom out, are going to be so irrelevant in 10 years because cars are not going to be driven by people anymore. They will be self-driving, and so on.”

The dusk of the automobile era

But lest one think Rimac might someday take all this advanced million-dollar EV technology in the Nevera and use it to create affordable electric family cars, he is clear that he has no intention of going head-to-head against Elon Musk. Others might do that with Rimac technology, he said, but he equates that to working on better music CDs just when streaming services are coming out.
Today, we are in the dusk of the automobile era, according to Rimac. He’s just doing his part to make sure the sunset is spectacular.
And, also, to turn a profit while there is money to be made in privately owned automobiles. Rimac will make its electric supercars in Croatia, while Bugatti will continue to assemble high-dollar gasoline-burning supercars at its current headquarters in Molsheim, France, where that brand was originally founded in 1909. Each will serve a distinct sort of customer.
“The easiest [move] for us would be to take a Nevera and put a different design on it and call it a Bugatti,” Rimac sad. “But that’s absolutely not what we are going to do.”
Currently, Bugatti is building the last few dozen examples of the Chiron, its current core model. After that, Rimac has indicated there will be a new Bugatti supercar that will probably be a plug-in hybrid. But they could also make other Bugatti models — though maybe not two-seat supercars — that will be fully electric.
In apparent contradiction to his stated pessimism about the future of cars, Rimac says he expects Bugatti, founded 112 years ago, to long outlive him. He now has “the responsibility [of] the next 112 years,” he said.
What that next century and then some might bring could be decided not just by Bugatti-Rimac, but by Rimac’s other company, Rimac Technology.
“I love cars, I make money by selling cars, but I think the big change that will come in the next decades,” he said. “In the last decades, the phones didn’t just change the phone industry. Apple didn’t just disrupt Nokia and the others. It actually changed our lives.”
Rimac isn’t ready to say just yet what that future will look like, one shaped by some radical redefinition of the automobile. But he’s working on it.