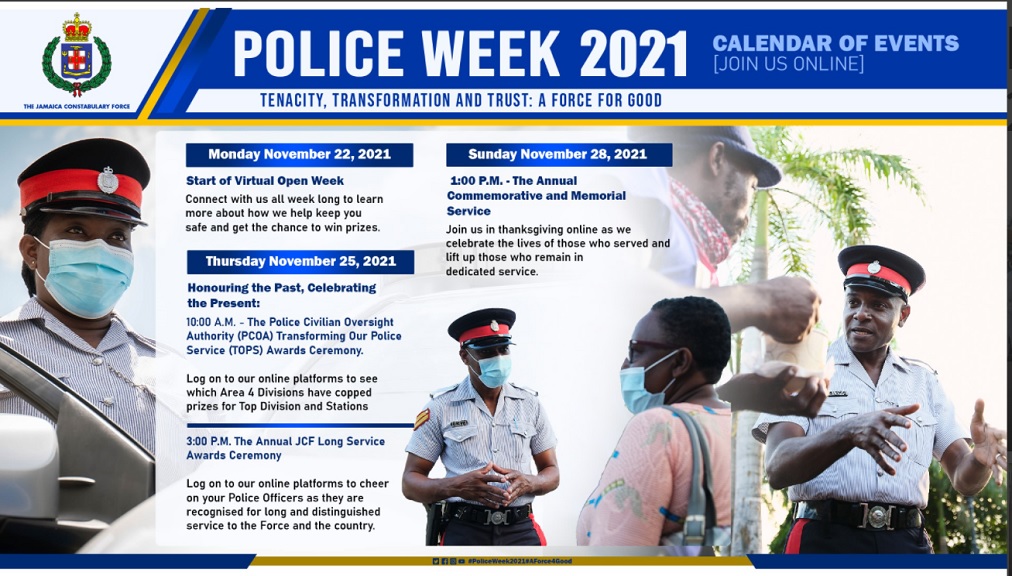 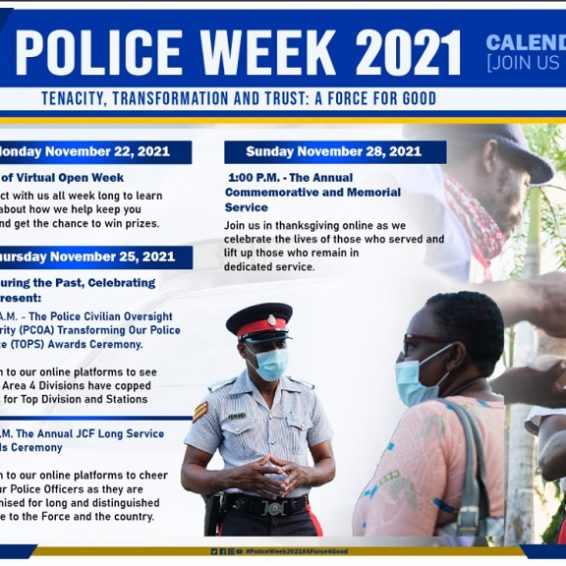 The Jamaica Constabulary Force (JCF) will be celebrating its 154th Anniversary during Police Week, November 22 to 28.

This year’s theme for Police Week celebrations is ‘Tenacity, Transformation, and Trust: A Force for Good’, and there will be a range of virtual activities designed for both members of the JCF and the public.

Deputy Superintendent of Police, Natalie Palmer, who is a member of the Police Week secretariat, explained that the week is a celebration and also a remembrance of officers who died during the year. “It’s a celebration because it is our 154th anniversary and the memorial part of it we have about 40 officers who… died, some of them in the line of duty, so we want to remember them in [a] special way.” DSP Palmer said.

The activities commence on Monday (November 22) and DSP Palmer stated that the week will allow the JCF to share with all internal and external stakeholders the gains made in improving the force.

“We also want to speak with our internal customers, … our police officers to show them the changes that are happening as also our external partners. We are talking about transformation, modernisation, and all the good things using technology that we have been implementing. And we wanted to share that also with the public and say what it is that we are doing, the changes we are making, how do you fit into those changes, and how it is that you can help us to keep you safe.” DSP Palmer noted.

Most of the activities planned will be virtual to observe the COVID-19 protocols. “Monday, we start with an open house, and you can go on our social media pages on Twitter and Instagram and you are able to interact with us on the social media platforms. We are going to be a

“On Tuesday… it will be a bit more sombre, as we will be interacting with the family members and children of our officers who… died in the line of duty and also over the one-year period. It is sad because we know that they contributed a lot. The Police Commissioner will be meeting with these families all over the country at various times, but that entire day is set aside for that.” DSP Palmer added.

On Wednesday, the JCF will be interacting with its external partners, such as police youth groups and neighbourhood watch, to discuss further collaboration and gather feedback on how to improve the relationship.

On Thursday, pomp and pageantry will be on full display as 130 members of the JCF will be recognised at a virtual Long-Service Awards Ceremony. The winners of the Police Civilian Oversight Committee Transforming Our Police Service (TOPS) competition will also be announced.

“These are officers who have given more than 18 years of service to the organisation. On Friday, we are having our virtual wellness fair in partnership with Lasco Distributors, as well as our ‘Run a Boat’ feature, which is just for our officers. We are cooking a pot and inviting over persons, but due to COVID, this is just for our officers,” DSP Palmed noted.

On Saturday, the police youth clubs will be in their communities and doing sensitisation sessions on safety for young persons. The Police Week activities will culminate on Sunday (November 28) with a commemorative and memorial church service, which will be streamed live on the JCF’s social media pages at 10:00 a.m.