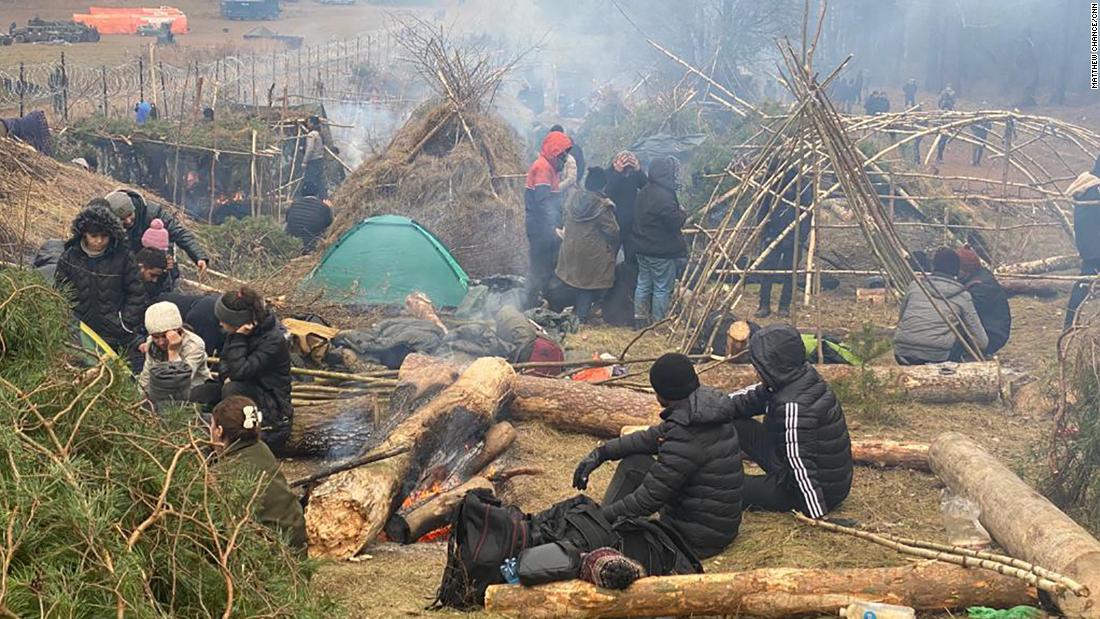 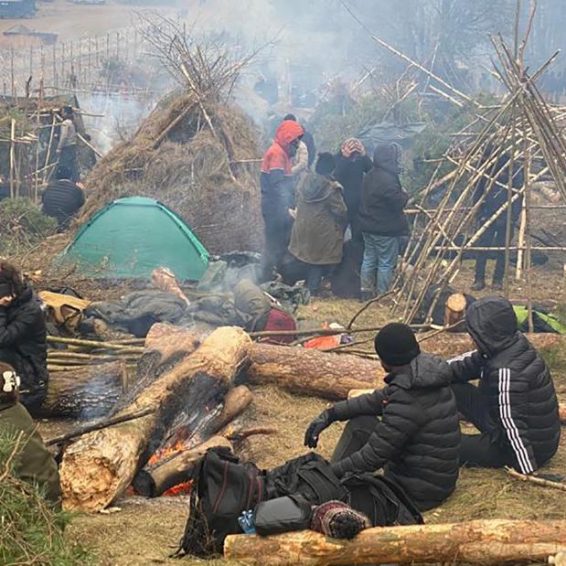 2 weeks ago·6 min read
ShareTweetPinShare
Home
World News
Children caught up in Belarus-Poland border crisis face bitter nights without shelter
The content originally appeared on: CNN
This coming week, the mercury will dip close to zero degrees Celsius (32 Fahrenheit) at night; rain is also forecast. Winter is coming and they are stuck out in the open, caught up in a geopolitical storm that shows no sign of abating.
There are 200 children and 600 women among an estimated 2,000 people massed along the Bruzgi-Kuznica border crossing separating Belarus from Poland, Belarusian border officials told CNN on Friday. Some of those are only babies or toddlers.
The migrants — most of whom are from the Middle East and Asia — are seeking to cross illegally into Poland, and from there into other European countries, particularly Germany, in search of a better life.
A lucky few have small tents; others have made rough shelters from the boughs and branches of the coniferous trees around them. Behind them is the forest; in front the razor wire fence erected by Poland to keep them out, patrolled by Polish police, border guards and soldiers.
Read More
Some have been waiting weeks now to try to cross the border and there’s a sense of brewing anger and frustration in the air. Some migrants have already died in the cold; hypothermia is a real risk.
Twenty-eight-year-old mother Shoxan Bapir Hussain said she had embarked on the journey from Iraqi Kurdistan with her husband and four-year-old son, Azhi Ali Xder, because the boy needs surgery for a back condition. Azhi, who has splints on his legs, can’t walk, she said.
Asked why Azhi didn’t have the surgery in Kurdistan, his mother replied: “Because not very good and maybe the operation fail … the doctor told me the operation in Germany is very good.”
The CNN crew, which was escorted to the straggling camp by the Belarusian authorities on Friday and Saturday, saw minimal infrastructure to support the thousands of people gathered there, with only two small water tanks and no toilet facilities visible.
The Belarusian Red Cross is delivering food and water but migrants who spoke to CNN said the deliveries were insufficient and uncertain. There’s barely enough to keep those already here alive — and Belarusian state border officials estimated the number of people in the border region would increase to 5,000 within a week.
As desperate people scrambled to get firewood, logs to sit on and other supplies from trucks bringing aid, armed Belarusian forces tried to push them back. Those crowding around one such truck delivering water were made to kneel down on the cold ground before some were allowed through to pick up bottles.
“I’m hungry, I’m hungry,” said a young girl in English.
Parents Ahmed and Ala, with their 15-year-old daughter Reza, told CNN they had traveled from Iraqi Kurdistan in search of a better life in Europe. They had been there for seven nights, they said, and still hold hope they will make it to Europe.
Another man, who gave his name only as Binar, said he had paid $2,000 to make the journey from Iraqi Kurdistan. “Our people want to go to Germany,” he said.
Western leaders have accused Belarus of manufacturing a migrant crisis on the European Union’s eastern frontier as retribution for sanctions over human rights abuses.
President Alexander Lukashenko’s government has repeatedly denied such claims, instead blaming the West for the crossings and accusing it of poor treatment of migrants.
Russia, Belarus’ largest political and economic partner, continues to defend Minsk’s handling of the border crisis while also denying any involvement in it.
President Vladimir Putin said in an interview aired Sunday by TV channel Russia-1 that Russia was “ready to help in every possible way if, of course, something will depend on us here,” state news agency TASS reported.
Putin also placed responsibility for the crisis at the EU’s door, accusing it of creating the conditions causing the influx of migrants. “And now they are looking for someone to blame, in order to absolve themselves of responsibility for the events that are taking place,” he said, according to TASS.
Polish Interior Minister Mariusz Kaminski on Saturday called the worsening situation “an attack on the entire European Union using an artificially created migration crisis.”
Belarusian Foreign Minister Vladimir Makei and EU foreign policy chief Josep Borrell spoke by telephone on Sunday, the Belarusian Foreign Ministry said. “Vladimir Makei informed his interlocutor about the steps taken by Belarus to reduce the flow of migrants from Asia, Africa and the Middle East,” as well as the provision of humanitarian assistance, the ministry statement said.
Borrell told French newspaper Le Journal du Dimanche that on Monday EU foreign ministers would extend sanctions on Belarus to include airlines and travel agencies thought to involved in bringing migrants to the Belarus-Poland border. Sanctions could also be imposed on some 30 Belarusian officials believed to be involved in the crisis, he told the newspaper.

Meanwhile, the authorities in Belarus insist they are doing what they can to support those stuck in the border region.
“The situation in the refugee camp on the Belarusian-Polish border remains difficult, nevertheless, the Belarusian side is doing everything to provide people and especially children with all they need,” the Belarusian State Border Committee said in a statement Saturday.
Britain’s army chief warns risk of accidental war with Russia is greater than during Cold War
“All measures are being taken to provide assistance to refugees. The frontier service ensures the necessary order and protection of the state border.”
Poland has barred journalists and international observers from entering the border region, making it difficult to assess the situation on the Polish side of the fence. But there is no sign yet of tensions easing.
The Polish Border Guard claimed on Sunday that dozens of migrants with the help of Belarusian security forces were preparing a “major attempt to break through” the Polish border.
“Some of the tents are starting to disappear. Foreigners get instructions, equipment and gas from Belarusian services. You can see that Belarusian side is getting ready today for a big attempt at crossing the border. Our forces are ready for action,” the border guard tweeted.
Polish authorities also reported seeing more groups of armed Belarusian officers and a growing commotion among migrants. Belarus state TV, ATN, reported that a group of about 100 or more refugees was on its way to the migrant camp.
The Polish Ministry of National Defense tweeted earlier Sunday that its forces in the Kuznica border area had been placed “on standby.”
Late Saturday, Poland sent a mass SMS message to phones in the region to warn that rumors that the Polish border was not well guarded or that migrants would be allowed to pass through to Germany were a “total lie and nonsense.” Another SMS message read, in part: “The Polish border is sealed. BLR authorities told you lies. Go back to Minsk!”
The messages include a link to a Polish government website with a more extensive and blunt message, warning that any effort to storm the border could lead to “dangerous developments.”
The show of force unfolding across the region is continuing to test a fragile political order, with allegations from the United States on Russia’s military buildup deepening concerns over the potential for a wider geopolitical crisis.
Neighboring Ukraine is also scaling up security, announcing Thursday that it would hold military drills with some 8,500 servicemen and 15 helicopters in an area near its borders with Poland and Belarus to counter a possible migrant crisis.
As long as the international standoff continues, those trapped between the Polish security forces in front of them and the Belarusian security forces behind will have little but hope and smoldering fires to keep them going.

CNN’s Antonia Mortensen and Katharina Krebs contributed to this report.