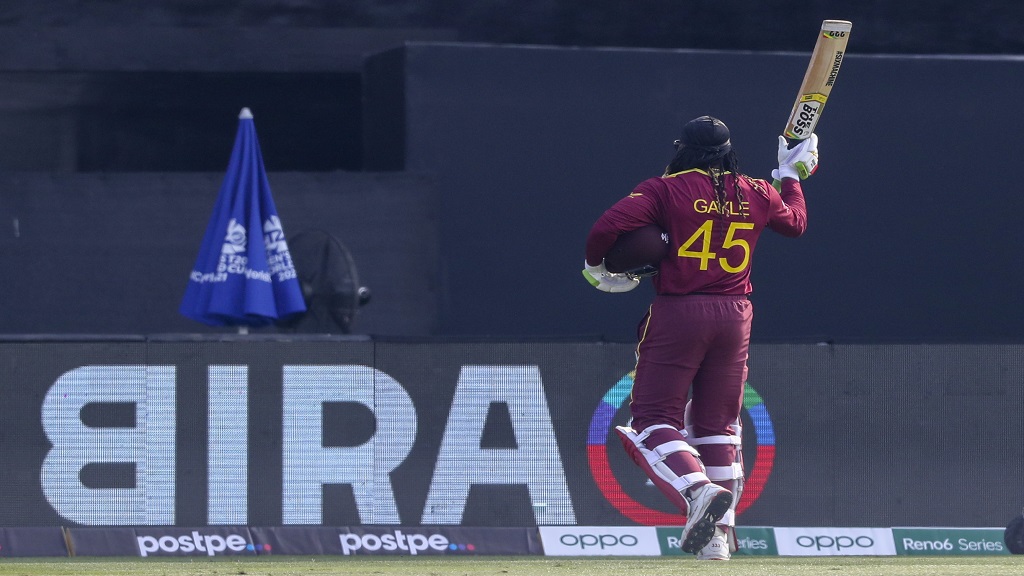 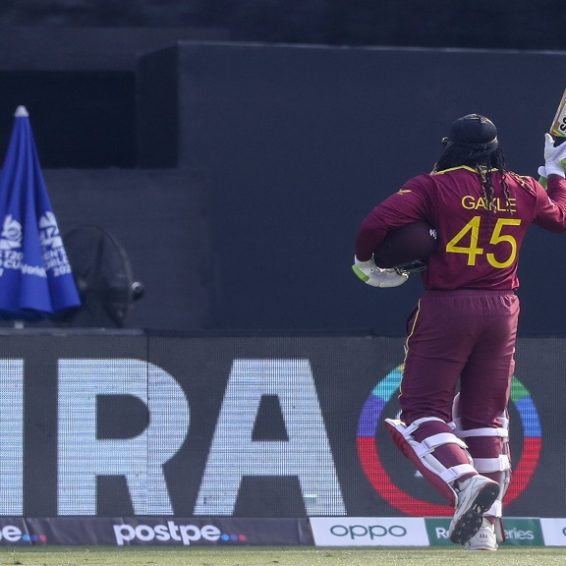 David Warner smashed 89 not out to lead Australia to an eight-wicket victory over West Indies at the T20 World Cup on Saturday, with Dwayne Bravo — definitely — and Chris Gayle — probably — playing their last games for West Indies.

Put in to bat, West Indies did well to reach 157 for seven, led by captain Kieron Pollard’s 31-ball 44 and Andre Russell’s explosive finish. Australia replied with 161 for two in 16.2 overs in what proved to be a comfortable chase.

West Indies started with a rapid 30 runs before collapsing to 35 for three, including the wicket of 42-year-old Gayle. He was out for 15, including two inevitable sixes, in what looked like the cricket great’s last innings for West Indies.

Gayle’s teammate, Bravo, had already announced his retirement from international cricket. All-rounder Bravo scored 10 in his last innings Saturday with bowling figures of 0-36 in four overs. Like Gayle, the 38-year-old Bravo won the T20 World Cup with West Indies in 2012 and 2016.

Gayle was out in trademark fashion, attempting to smash pacer Pat Cummins and sending an inside edge on to leg stump. He raised his bat and both hands as he left the field, hugged Bravo and received applause from teammates. His apparent retirement, which has not been officially confirmed, took many observers by surprise.

Gayle is the most prolific scorer in the format, with the left-handed batter the first to score 14,000 T20 runs for clubs and country in all competitions. He also played 103 Tests for West Indies with an average of 42.

Mitchell Starc (1-33) had a finish to forget, being smashed for six off the last two balls of West Indies’ innings by Russell (18 not out). Josh Hazlewood was the most successful bowler for Australia with four for 39 off four overs, while Adam Zampa was economical with one for 20, also in four overs.

Australia also started well by reaching 33 without loss after three overs, with Warner supplying most of the runs, before his opening partner Aaron Finch (9) was bowled by Akeal Hosein (1-29) in the next over. Warner’s 56-ball innings included nine fours and four sixes. Mitchell Marsh hit a 32-ball 53 as Australia cruised to victory.

Gayle made a final mark on the game by claiming Marsh’s wicket with one for seven runs from his single over.

Australia needed to win convincingly to maximize their chances ahead of the final Group 1 match later Saturday between leader England and South Africa in Sharjah.

England and second-place Australia have eight points, two more than South Africa, with Australia and South Africa keeping a close eye on net run rate. Two teams from the group advance to the semifinals.

Australia kept the same team from its eight-wicket rout of Bangladesh on Thursday. Two-time champion West Indies made one change from their 20-run defeat to Sri Lanka on Thursday, replacing Ravi Rampaul with spinner Hayden Walsh.