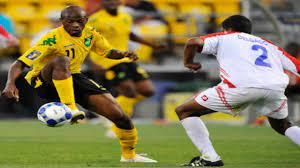 ‘His heart was in the right place’, says Luton Shelton’s brother | Loop Jamaica

“His heart was in the right place”, says Shamar Luton of his brother Luton who is being posthumously awarded the Order of Distinction (OD) for his contribution to football in Jamaica.

“He wasn’t perfect, but his heart was in the right place,” said Shamar.

That’s how he remembers his older brother, Luton Shelton Jr, who succumbed to amyotrophic lateral sclerosis (ALS), also known as Lou Gehrig’s disease, in January of this year.

The leading all-time goal scorer in a Reggae Boyz shirt with 35 goals from 75 caps between 2004 and 2013, Kieshawn George Luton Shelton Jr is being posthumously awarded the Order of Distinction, Officer Class by the Jamaican Government for his contribution to the field of sports, in particular, football.

He is among more than 140 Jamaicans who will be conferred with national honours on National Heroes Day, Monday, October 18.

For Shamar, who turned 32 last month, Luton’s greatness was short-lived.

“Luton was a family man. Even though he was an athlete and a superstar to many, for us (family) he was just Kieshawn, the cousin, the brother,” said Shamar. He was speaking with Loop News during an interview from Miami, Florida, where he represents Miami United FC in the National Premier Soccer League.

“He was just somebody we were happy to be around; he was the person who called us for family dinner and family meetings whenever he would come back to Jamaica,” Shamar reminisced.

His voice filled with emotion, Shamar said “We miss those things because along with my father, Luton Shelton Snr, he was the glue that held the family together.”

Shamar, who grew up with Luton and other siblings in the tough inner-city community of Tivoli Gardens in West Kingston, explained that the family was a big, extended group of up to 70 people from several Corporate Area communities.

“Luton was one of those players who Jamaica’s (Jamaica Football Federation) policy of giving five tickets to a player (for home matches) couldn’t work. He had to dip into his pocket to buy an additional 30 tickets just to get family members to a game,” Shamar recalled.

“This was just so we could see him play with the Reggae Boyz. That’s how unselfish he was”.

That unselfish streak saw Luton building a house for his parents before he secured one for himself, said Shamar.

“Many people really saw his talent and his output, but they didn’t really know his heart. And that is what has broken us the most. A lot of people saw him as an athlete and he was healthy. For us as relatives, the questions are still there – how could this have happened to such a great man, a great brother, a family man? Why would the Lord do this to our family?”

Shamar said there was much more to his brother’s character than his sporting prowess.

“We (the family) are grateful for the award and we think it is most deserved. But, if we could nominate him for the best family man, or hero of a family award, then Luton Shelton would be nominated and awarded for that,” he stated.

“And I’m talking about a family that comes from Tivoli Gardens, that comes from the heart of Kingston, from all walks, and his legacy and success united the family and it kept a lot of us positive,” Shamar continued.

He said Luton playing and being successful at football served as an inspiration for his siblings.

“I was successful with my stint at St George’s College. I won Pepsi, Colts and Manning Cup at George’s. I then left for the United States on a football scholarship.

“My sister Luteisha did the same, and then my little brother Akeem also played for George’s when they had the super team which won the league, and he too got a football scholarship,” Shamar said proudly.

He gives all credit to Luton.

“The example and motivation that he was for the family gave us a lot of hope. He made us know that if we tried hard enough, if we put in the work, it would work out for us just like it did for him.

“It kept us going and most of us got an education, a degree, so we in turn could stand on our own and were also able to feed our own families.”

Shamar also spoke of his father’s sudden death in May 2019 at age 54 from an acute asthma attack.

“I think my dad would have really been crushed to have had to bury my brother,” said Shamar as his voice cracked.

“I remember when we were in Florida seeking treatment for Luton and my dad cried and prayed and said ‘I wish I could take your spot. I wish it could’ve just been me (being sick) and you’re good,'” Shamar added as his voice cracked again.

Such was the admiration for his older brother that Shamar admitted that many times he would just watch Luton play as a fan. He also reminisced on going to places and hearing people talk about his brother’s exploits on the field after a game.

“What really felt good was even if Jamaica had a bad game I would hear people say ‘Jah know, the forward man, him good'”, Shamar recounted.

He said Luton, who played for Harbor View FC before going on to represent Jamaica and several clubs in Europe, was a model citizen not just for the family, but for many inner-city youths.

“He showed us that you could come from one of the ‘baddest’ communities and you didn’t have to affiliate with any gang member. You keep your head down, stay focused and you can achieve whatever you want.”

As the country celebrates National Heroes Day, Shamar said Luton and his dad are his real heroes. He added that football great, Cristiano Ronaldo, was also his hero because he sees in him the same commitment to family and football as he saw in his brother.