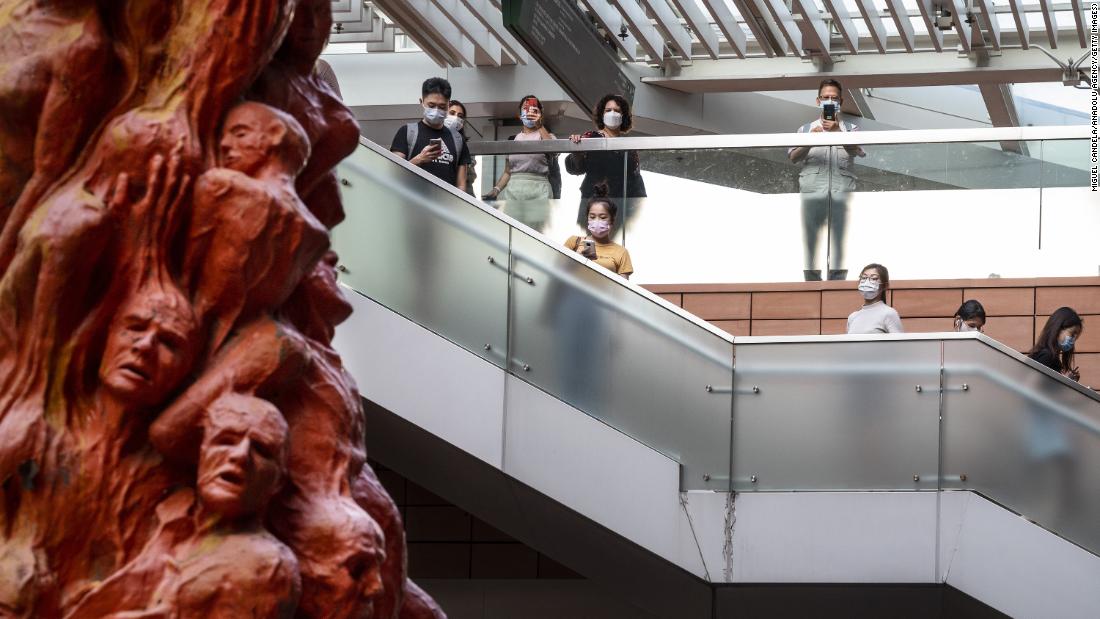 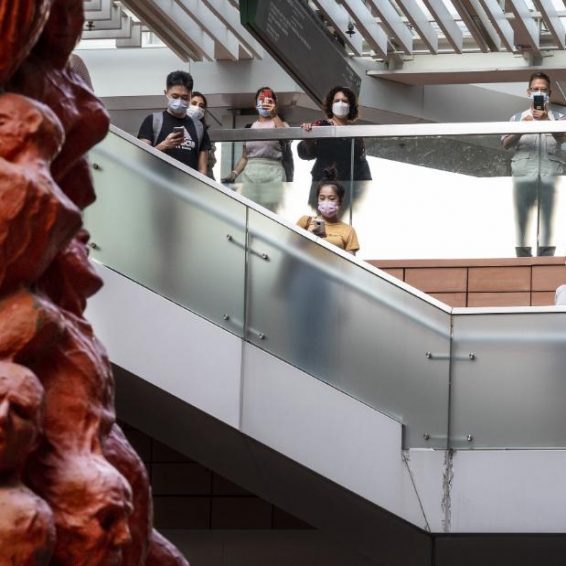 Hong Kong’s statues are disappearing, but their symbolism may prove harder to erase

Depicting a heap of screaming faces and contorted torsos, the “Pillar of Shame” was not just a reminder of the 1989 Tiananmen Square massacre — it was, for many, an emblem of free speech in Hong Kong.

One of the vanishingly few memorials to the crackdown’s victims tolerated on Chinese soil, the statue’s presence at University of Hong Kong (HKU) was long considered a bellwether of artistic censorship in thesemi-autonomous city. Its removal last Wednesday night was, for some students, another sign of Beijing’s tightening grip.

“By removing this pillar… we can see that our freedom is being taken away, bit by bit, day by day,” said one student on campus the next morning. “It reminds me that the (Chinese Communist Party) is an illegitimate regime,” another said.

CNN agreed to not disclose the names of students interviewed, as several of them feared retribution from authorities. HKU emeritus professor John Burns, however, was more open in his criticism. Eliminating memorials to the bloody military crackdown on unarmed mostly student protesters — a taboo topic on the mainland — demonstrated “further erosion of the relative autonomy of HKU from the Chinese state,” he said over email.

Workers remove part of the “Pillar of Shame” into a container at University of Hong Kong on December 23, 2021 in Hong Kong. Credit: Anthony Kwan/Getty Images

“HKU is not a government department and need not subscribe to official propaganda about the Tiananmen incident,” Burns added. “So far it has not. But removing the statue moves HKU and Hong Kong closer to the official state of amnesia about Tiananmen.”

HKU was not the only university to seemingly take advantage of the quiet winter holidays. On Christmas Eve, two other institutions — the Chinese University of Hong Kong (CUHK) and Lingnan University — removed on-campus depictions of a figure known as the “Goddess of Democracy.” Showing a woman clutching a flaming torch above her head, the original statue was first erected by students in Tiananmen Square during the 1989 pro-democracy protests and destroyed by the Chinese military during the crackdown.

Chen Weiming, the Chinese-New Zealander artist behind the bronze replica at CUHK, said its removal indicated the end of “one country, two systems,” the principle that protects Hong Kong’s freedom of expression. “Now it’s one country, one system,” he declared.

Like HKU’s governing body, which said it acted “based on external legal advice and risk assessment,” Lingnan University told CNN its decision followed a review into “items on campus that may pose legal and safety risks.” CUHK said in a statement it had “never authorized the display” of the statue on its grounds.

The “Goddess of Democracy” statue, in the Chinese University of Hong Kong, prior to its removal last week. Credit: Daniel Suen/AFP/Getty Images

The fate of a fourth sculpture may also hang in the balance: Authorities at City University of Hong Kong, another institution in the territory, reportedly ordered its student union to remove a “Goddess of Democracy” replica from its campus. The university told CNN it had only ever granted permission for the statue to stand until March 31, 2021, but did not comment on whether this meant it would be forcibly removed.

For three decades, Hong Kong has been the only place on Chinese-controlled soil where an annual mass vigil has been held to mark the events in and around Tiananmen Square on June 4, 1989, during which large-scale pro-democracy protests were brutally crushed by armed Chinese troops.

The military crackdown remains one of the most tightly censored topics in mainland China, with discussions of it scrubbed from mass media. Chinese authorities have not released an official death toll, but estimates range from several hundred to thousands.

The removal of the statues comes amid a broader clampdown in Hong Kong, following the enactment of a national security law in 2020 that criminalizes acts of secession, subversion, terrorism and collusion with foreign forces.

The territory’s government has repeatedly refuted accusations that the legislation has stifled freedoms, claiming it has instead restored order in the city after it was shaken by mass protests from 2019.

So far, the law has primarily targeted political activists and figures from pro-democracy media outlets. But it has also left those in academia and the arts uncertain about what is permissible. The past year has seen instances of both censorship and self-censorship, from the passage of a new film censorship law to “safeguard national security” to prominent artist Kacey Wong’s decision to enter self-imposed exile in Taiwan.

The statues’ disappearance may not be the end of the story. Creator of the “Pillar of Shame,” Danish artist Jens Galschi?t, said he hopes to reclaim the work and exhibit it elsewhere. HKU did not respond to CNN’s request for comment about the artist’s attempts to recover his creation or the current whereabouts of the statue, which was last seen being placed, in parts, into a container. The university earlier said it will be held in storage.

“It’s still my property… if we get it, then we’ll (bring) it back to Europe, I’ll put it together and it will make a tour,” Galschi?t told CNN. “At the moment, we have a plan to put it in Washington, DC, in front of the Chinese embassy, just to show China that there’s a place in the world where we can talk about what happened in ’89.”

The controversy surrounding the sculpture means that it will, now, be tied to not only the Tiananmen Square massacre but also the erosion of Hong Kong’s artistic freedoms. But it was not the only version created by Galschi?t — nor was it even the first. The original “Pillar of Shame” was erected in Rome to honor those killed worldwide by hunger ahead of a Food and Agriculture Organization summit in 1996. Other versions of the work were subsequently installed in Mexico and Brazil to commemorate the victims of the Acteal massacre and Eldorado dos Caraj?s massacre, respectively.

Demonstrators gather around the Lady Liberty Hong Kong statue during a rally in the Central district of Hong Kong in September 2019. Credit: Justin Chin/Bloomberg/Getty Images

The artwork’s shifting meaning is a reminder that destroying images may only serve to strengthen their symbolic power. Indeed, replicas of a crowdsource-designed statue depicting a masked pro-democracy demonstrator, known as “Lady Liberty,” have cropped up across Hong Kong since the original was pulled down and vandalized by unidentified assailants in October 2019. And the Chinese military’s decision to topple the original “Goddess of Democracy” in 1989 means that every year, on June 4, identical versions appear in cities around the world — from Taipei to Toronto — to mark the crackdown’s anniversary.

Beijing University students put the finishing touches on the Goddess of Democracy in Tiananmen Square in Beijing, May 30, 1989. Credit: Jeff Widener/AP

Art-activist group Lady Liberty Hong Kong is hoping the “Pillar of Shame” will have a similar fate. The group has used more than 900 photos to create an open source 3D model of the work that can be downloaded and used to reproduce the statue with relative ease.

“The idea is that everyone can print a copy (of) it and place it wherever they want,” the group’s founder, Alex Lee, said over the phone last week. “In the digital age, there’s no limitation of what you can do with virtual or physical objects — (the hope is) for everyone to try to preserve this symbol.”

The New School for Democracy, an NGO founded by Wang Dan, a long-exiled student leader of the Tiananmen Square protests, said it is raising funds to build its own version — with Galschi?t’s blessing — in Taiwan. It hopes the sculpture will be completed by June 4 next year, to mark the massacre’s 33rd anniversary.

In a statement responding to last week’s controversy, founder and president of the US-based Campaign for Hong Kong, Samuel Chu, wrote that the “Pillar of Shame” had transformed in meaning from a “touchstone for freedom” to “a tombstone for freedom.”

“Removing the public statues only reveals the statue-shaped hole in the hearts of minds of all of us,” he added.

Top image: Visitors and students take photos of the “Pillar of Shame” statue at the University of Hong Kong on October 11, 2021.