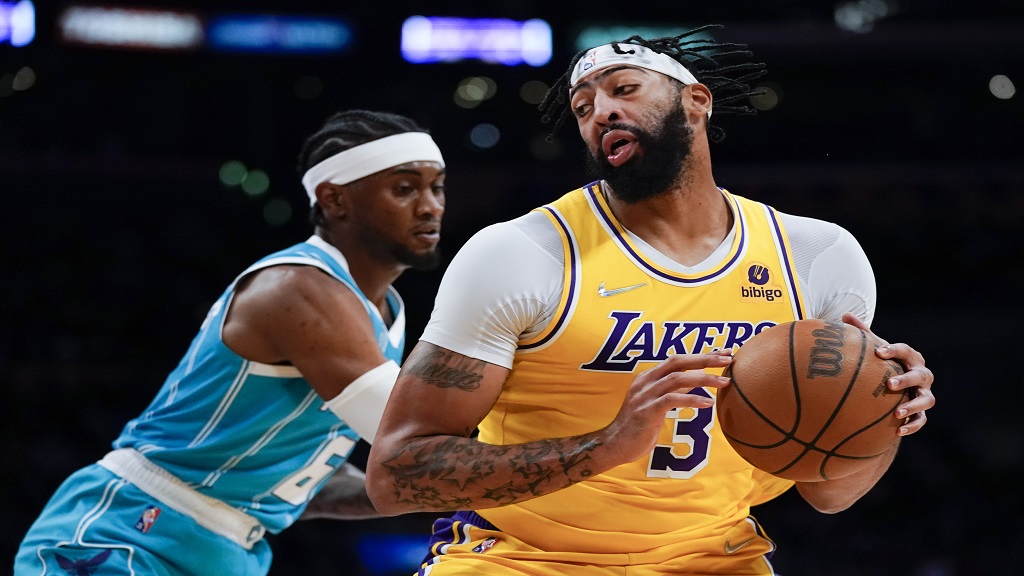 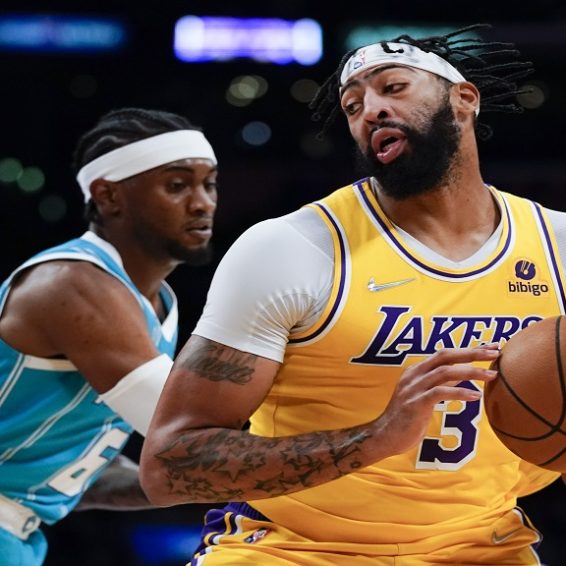 Even on a Los Angeles Lakers squad teaming with established veterans, Anthony Davis has had to take on more of a leadership role with LeBron James sidelined.

On Monday night, Davis showed his mettle and then some despite dealing with some ailments of his own. The All-Star forward had 32 points and 12 rebounds as the Lakers beat the Charlotte Hornets 126-123 in overtime in the NBA.

“He’s dealing with a lot of stuff and toughing it out,” coach Frank Vogel said. “He made some big buckets and was terrific on the defensive end as well.”

Davis has been dealing with a right thumb sprain and an illness. He said he threw up at the end of the third quarter, but that wasn’t going to sideline him.

“I had 43 minutes of work. Now, I have 48 hours to replenish,” Davis said. “With LeBron out. we don’t have all our guys. I have to take command. Even when LeBron is playing, guys are telling me to make sure I stay in control of the team and put guys where they need to be.”

Davis had six points in overtime, including a pair of free throws that gave Los Angeles a three-point lead with under a minute remaining. He also partially blocked Terry Rozier’s jumper from the corner on the final possession as the Hornets tried to send it to a second overtime.

Russell Westbrook had his first triple-double with the Lakers and Carmelo Anthony scored a season-high 29 points off the bench. It’s the Lakers’ first victory in the four games that James has missed this season.

Westbrook notched his 185th career triple-double. Finishing with 17 points and 14 assists, six of his 12 rebounds came in the fourth quarter and overtime.

Anthony was 7 of 10 from beyond the arc, including a 26-footer in transition to put the Lakers up for good at 122-121 with two minutes remaining in overtime.

“I’m not giving defenders a chance to close out. I feel good, I’m in a great rhythm and taking advantage of teammates finding me to knock those shots down,” said Anthony, who is tied for third in the league with 39 3-pointers.

Rozier had a season-high 29 points, while Gordon Hayward added 21 and Miles Bridges had 19. The Hornets’ fifth straight loss put a damper on LaMelo Ball’s second career triple-double, as the Chino Hills, California, native had 25 points, 15 rebounds and 11 assists.

“I thought he took a step forward as a professional. He moved the ball, he shared it and then made big shots,” Hornets coach James Borrego said.

Monday’s game was the first of the young season in which players on opposing teams had triple-doubles. It happened twice last season when, coincidentally, Westbrook was one of the players.

A dunk by Davis gave the Lakers a 110-99 advantage with 5:10 remaining before the Hornets went on a 16-5 run to tie the game at 115 with Bridges’ three-pointer with 23.7 seconds remaining in regulation.

Part of Charlotte’s rally included five free throws from Ball after the Lakers were assessed three technical fouls for delay of game and then to Anthony and Westbrook for arguing the call.

Over in in San Francisco: Stephen Curry scored an NBA season-high 50 points with nine 3-pointers, 10 assists and seven rebounds, almost single-handedly leading the Golden State Warriors past the Atlanta Hawks 127-113.

Only Hall of Famers Wilt Chamberlain and Rick Barry had registered a game with 50 points and 10 assists in Warriors franchise history.

Curry notched his 10th career 50-point game and already had 24 points on 7-for-12 shooting by halftime with five 3-pointers.

He wound up 14 for 28 from the floor and made all 13 of his free throws as the Warriors won their fifth straight. They are holding opponents to 95.8 points during the unbeaten stretch.

Trae Young had 28 points and nine assists in Atlanta’s fourth straight loss and sixth in seven.