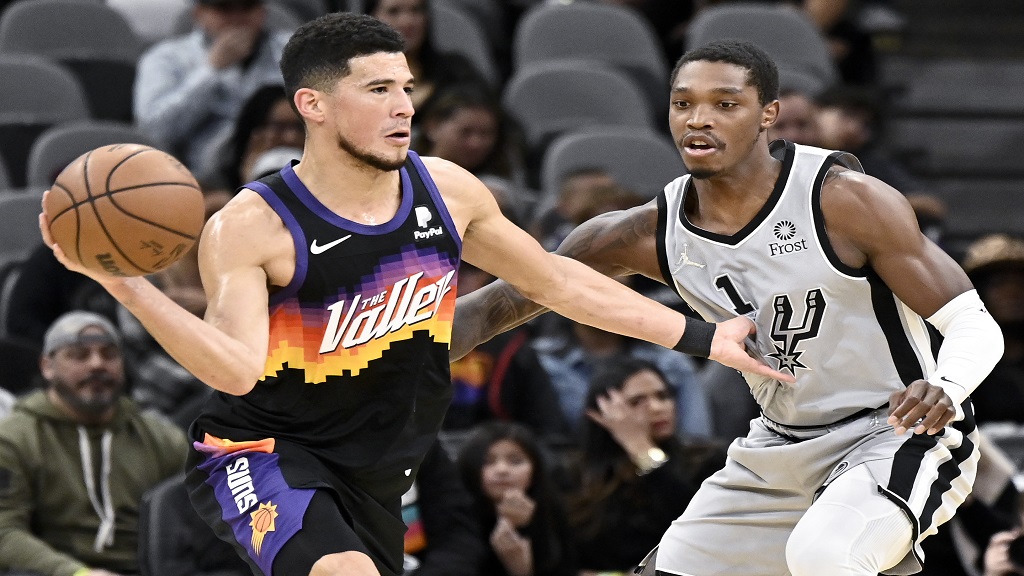 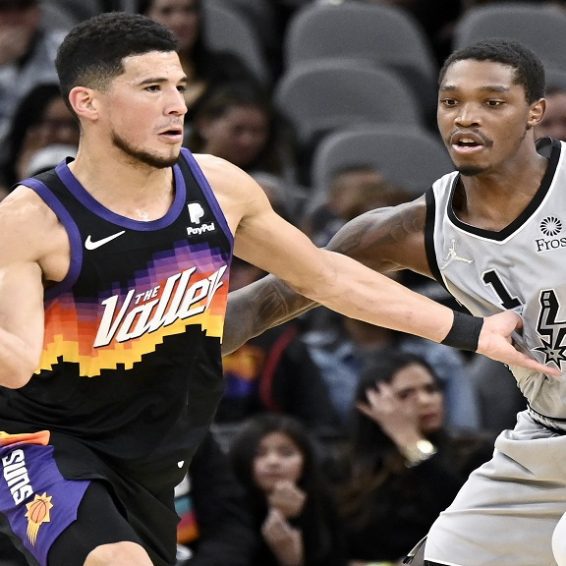 Devin Booker had 23 points, Deandre Ayton had 21 points and 14 rebounds and the Phoenix Suns won their 13th straight, rolling past the San Antonio Spurs 115-111 in the NBA on Monday night.

Cameron Payne added 20 points off the bench for Phoenix, which had six players finish in double figures. Phoenix finished with 25 assists and went 45 for 87 (51.1%) from the field.

San Antonio point guard Dejounte Murray had 18 points, 11 assists and 10 rebounds for his seventh career triple-double. But the Spurs have now lost five straight and eight of 10 for their second-worst start in franchise history.

De’Aaron Fox had 23 points and Buddy Hield scored 21 for the Kings.

Gentry was promoted to interim coach after the Kings fired Luke Walton on Sunday. Gentry most recently served as head coach for the New Orleans Pelicans (2015-20). He’s also had head coaching stops with Miami, Detroit, the Los Angeles Clippers and Phoenix.

BOSTON (AP) — Jayson Tatum scored 30 points, Jaylen Brown had 19 in his return from missing eight games with an injury and Boston coasted by Houston, sending the Rockets to their 15th straight loss.

Dennis Schroder added 18 points for Boston, which have won three straight and eight of 11. Al Horford had 11 points and 11 rebounds. It was Tatum’s fourth straight game with 30 or more points.

Armoni Brooks had 17 points for Houston (1-16). No starter reached double-digit scoring. The Rockets’ only win came at home against Oklahoma City in their second game.

Starting centre Robert Williams III also returned for Boston after being out the last three games with a sore left knee. He had 15 rebounds and two points.

MILWAUKEE (AP) — Jrue Holiday scored 18 points and Milwaukee Bucks opened the biggest halftime lead in franchise history on their way to a blowout of Orlando Magic.

The Bucks’ 77-36 lead at the break also was Orlando’s biggest halftime deficit ever. Milwaukee eventually built the margin to 51, becoming the first team to lead a game by at least 50 points this season.

Milwaukee’s Pat Connaughton scored 17 and shot 5 of 7 from 3-point range as the Bucks won their fourth straight. Bobby Portis had 13 points and 11 rebounds. Giannis Antetokounmpo had 12 points, eight rebounds and nine assists in only 24 minutes.

Moritz Wagner led Orlando with 18 points. The Magic also got 14 from R.J. Hampton, 13 each from Robin Lopez and Mychal Mulder and 12 from Chuma Okeke.

DeMar DeRozan led the Bulls with 18 points, while Zach LaVine scored 17 — just the second time this season he was held to fewer than 20 points.

It was a one-sided affair for much of the night, with Indiana stretching their lead to as many as 35 points in the fourth. Chicago had a few offensive spurts, but ended up with 36.5% shooting for the game. The Bulls played their reserves for the entire final frame.

LaMarcus Aldridge had 21 points and 11 rebounds off the bench for the Nets, who won for the sixth time in seven games.

Darius Garland scored 24 and Jared Allen had 20 points and 15 rebounds. Lauri Markkanen added 22 points in his first game since Nov. 1 for the still short-handed Cavs, who had chances down the stretch but missed some shots and made critical mistakes.

LaMelo Ball had 28 points and 13 rebounds to help Charlotte to their second win over Washington in the last week.

Montrezl Harrell scored 24 points and had a season-high 18 rebounds for the Wizards, while Kentavious Caldwell-Pope had 17 points, Bradley Beal scored 18 and Kyle Kuzma had 11 points and 13 rebounds.

Ja Morant had 32 points and Desmond Bane added a career-high 28 as the Grizzlies scored the final seven points for their third win in their last four games.

Bojan Bogdanovic scored 24 points and made a season-best seven 3-pointers. He made back-to-back jumpers from beyond the arc in the final two minutes to put the Jazz in prime position.

ATLANTA (AP) — Trae Young scored 21 of his 30 points in the second half, Clint Capela finished with 10 points and 15 rebounds, and Atlanta Hawks closed a perfect five-game homestand with a win over Oklahoma City Thunder.

Thunder rookie Josh Giddey, a 19-year old guard from Australia, had 15 points, eight assists and seven rebounds, and Luguentz Dort added 15 points. Oklahoma City were without leading scorer Shai Gilgeous-Alexander, who missed his first game of the season with a sprained right ankle.

One game after making 51.6% of their shots from the field Saturday against the Hornets, the Hawks shot 54.2% Monday night in the first half and 48.3% overall.

Anthony Edwards scored 13 of his 18 points in the second half and Jarred Vanderbilt, who came in averaging five points per game, matched his season high with 16 points and grabbed 11 rebounds.

The Timberwolves dominated the hustle categories, too, converting 23 New Orleans turnovers into 28 points and 21 offensive rebounds into 26 second-chance points.

Willie Hernangomez had 19 points and 11 rebounds for New Orleans, while Nickeil Alexander-Walker scored 14. But the Pelicans did not get their usual production from Brandon Ingram, who shot 2 of 13, including 1 of 7 from deep, and finished with nine points and six turnovers.