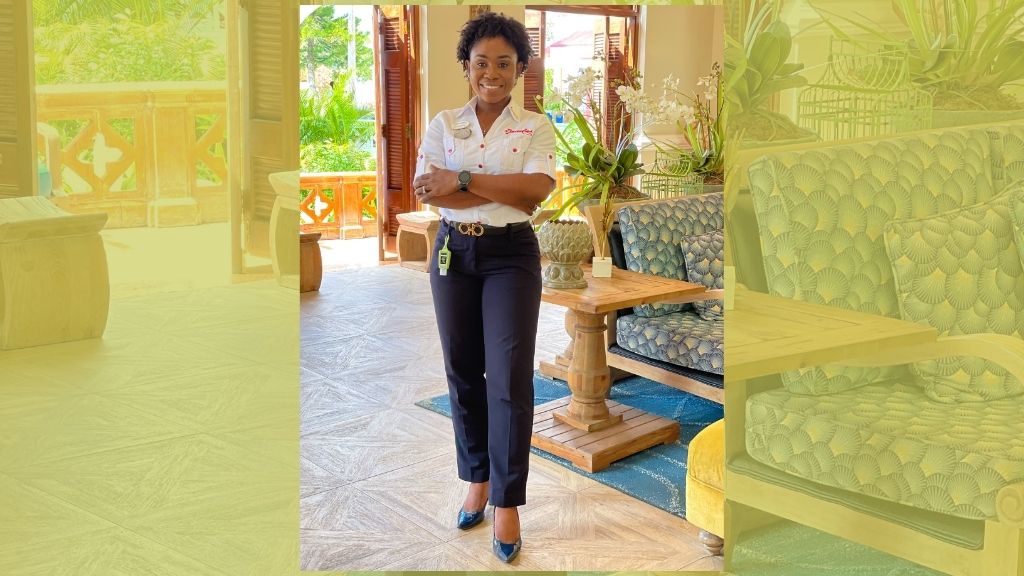 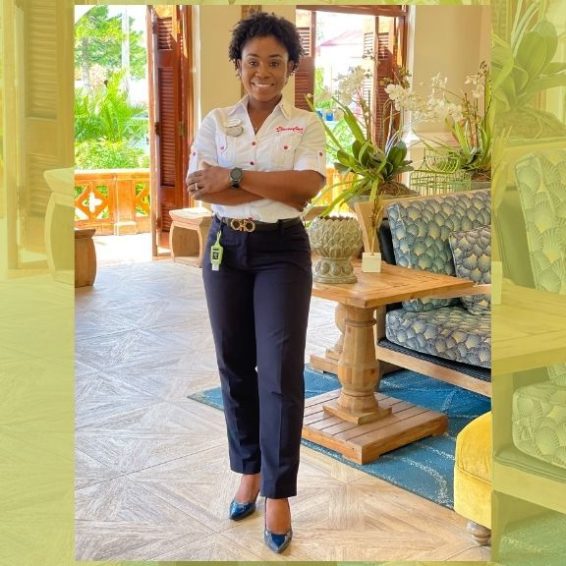 Nickesha Greenfield, a 21-year tourism veteran has much to celebrate as the decorated resort sales manager at Beaches Negril, even as she pauses, to reflect on the setbacks she has encountered on her journey.

Some of these challenges, she admits, were due to her own imposter syndrome.

But today, thanks to her progressive tenure at Beaches Negril, she is more than confident that she is the woman for the job and so much more.

‘Growing up, I genuinely considered myself a ‘dunce’. I always knew I was good with my hands, I was confident in my ability to serve and make people happy, I was skilled, but I certainly didn’t think I was bright,’ Greenfield explained.

Growing up in a home with her parents, five siblings, many cousins and distant relatives, Greenfield’s mom would open her home to, she believed that she thrived around a large audience.

But, her first time in the hotel industry taught her otherwise.

Her mother loved to bake and Greenfield would be in the kitchen with her helping out. She was a natural for the service industry, and she set out to get her qualifications in food and nutrition and home economics at Frome Technical High School.

Greenfield admits that school was not her first love, owing to a bad learning experience that drove fear into her and made the theoretical aspect of school way more difficult for her.

As a result, she was adamant that she wanted a career that would be hands-on and had nothing to do with a lot of paperwork.

Food and beverage she thought were perfect.

It was during her final year of high school that Greenfield got her chance to experience the working world when she had her work experience in the kitchen department at Sandals Negril – the sister resort to Beaches Negril, where she has been employed now for the past two decades.

‘I was such a timid youngster walking into Sandals Negril, but that resort made me realize how much there was to learn in the kitchen and I soaked it all up.’

‘They made me love it even more; everyone was so patient and eager to teach me; my knife and presentation skills learnt from the team impressed my teachers and had me passing with flying colours’, she fondly recalled.

After finishing high school, she landed a job as a waitress at a popular sports bar and restaurant in Negril where she worked for a year and six months before learning from her sister about an opening at Beaches Negril in the dining room.

In 2000, she joined the Beaches Negril team as a server and the shy, yet eager youngster made her name as one of the best, winning numerous awards and even a scholarship to pursue further studies courtesy of the resort.

That scholarship offer, according to Greenfield, was her first major blunder in her path to growth and greatness; ‘I got the scholarship and the opportunity to advance myself in the palm of my hands and I didn’t believe in myself enough to even complete the application form,’ she shared.

‘I knew my general manager and the HR team were disappointed that I didn’t take up the offer and I was disappointed in myself.’

‘I knew I failed in that area but I was going to make up for it in what I thought I was good at so I went full throttle learning everything I needed to learn so I could grow in the dining room; the supervisors saw and felt my passion and they took me under their wings,’ Greenfield added.

She was exposed to a lot of leadership duties and was later promoted to the hostess, an assistant to the supervisor.

During this time she caught the attention of the, then sales and weddings manager Nicole Myers and the general manager who followed her as she left a trail of excellent scores and impact at the various restaurants she worked.

In 2003, she was approached by Myers and given the opportunity to transition to her department as a weddings coordinator.

Again doubt reared its ugly head and she was tempted to say no to another great, yet new and unknown territory.

But, Myers would have none of it and managed to convince her to jump at the opportunity.

‘I will never forget the impact Nicole Myers had on my career and my character. She invested her time in me. I was placed at a desk with a computer in front of me that I didn’t know how to operate.’

‘I learnt right there at that desk how to type on a computer. I moved from stuttering, shivering and sweating when asked to present anything to my team of fewer than 10 persons to someone who now presents in front of hundreds of persons in the travel trade internationally, with ease.’

‘I host weddings, emcee numerous staff and entertainment events and so much more, all because that voice in my head of my manager kept saying you can do it,’ she explained.

‘Greenfield has also gone on to win pageants and also serve as a coach to pageant contestants.’

Soon she moved from wedding coordinator to wedding planner and aided in their department is tasked with training new recruits.

Fate would have it that in 2004 another opportunity presented itself by way of a scholarship, and this time; she did not hesitate to grab it.

Through this scholarship from Beaches Negril, she fought her fear of academic failure and went on to receive an Associate Degree in Events and Hotel Management from the Western Hospitality Institute.

In 2009, Greenfield was promoted to weddings manager, another period of self-doubt again threatened to defeat her career progress.

This was her very first stint at leading an entire department, but if she could conquer her dread in the classroom, then she could lead her team to success.

Soon she became comfortable and confident in her abilities. She was seen as the standard-bearer but also very strict as there was little room for error when planning and executing dream weddings for her couples.

‘I led as my previous manager did, investing in my team but not giving them the leeway to drop the ball at any time.’

‘They thought I was too hard on them, but eventually realised that I was doing it for their own good. I would get the calls later on down the line, thanking me for how I led them and how it impacted their lives positively.’

In 2013, Greenfield was awarded manager of the year at the resort’s Annual Prestige Awards; a year after copping this coveted award, Greenfield transitioned to the sales department as Resort Sales Manager.

She admits that working in the tourism industry and especially at Beaches Negril for 21 years has been a great building block for her.

She is thankful to the company for all the opportunities she received thorough training and working alongside some excellent hoteliers.

‘I had someone invest a lot in me when I just started working at Beaches Negril and this paved the way for my success. Each time I feel as if I can’t do it, I remember the voice of my former manager in my head telling me that I can.’

The training team at this awesome resort also invested in me, they took me from a youngster with little qualifications and limited experience and changed my life for the better.

This company, Beaches Negril and by extension Sandals Resorts International, has allowed me to travel at no expense to me to so many countries, in fact, they were responsible for me getting my visa and travelling for the very first time.

‘Being here, investing in others just as hard as my former leaders invested in me is my way of paying homage to this phenomenal brand and to the industry,’ she expressed.