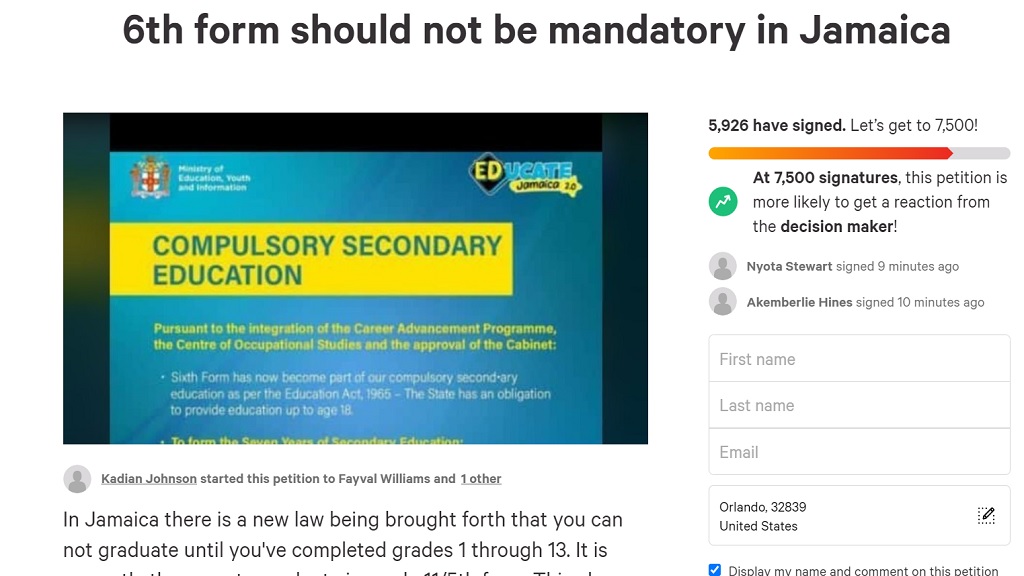 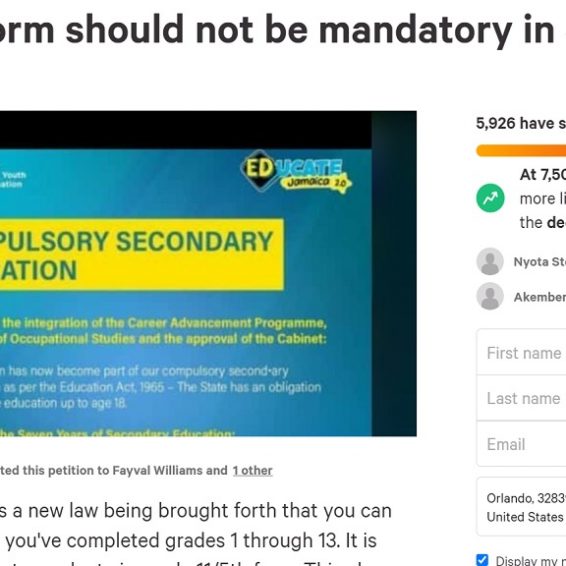 The student, who lists her name as Kadian Johnson, created the petition on the American-based change.org website. Up to midday Wednesday, she was 1,500 signatures shy of the 7,500 target.

Since last Thursday’s launch of the Sixth Form Pathways Programme, there have been mixed views from students, parents and educators on the plan to create a seven-year school programme for secondary level students.

The programme is intended to allow students to pursue a two-year course of study with alternative opportunities, alongside the traditional sixth-form curriculum.

However, Kadian does not agree with the intended change and created the petition late last week on change.org, which serves to facilitate petitions on various issues.

According to the petition’s description, Johnson claimed that in Jamaica, “there is a new law being brought forth that you cannot graduate until you’ve completed grades one through 13.

“It is currently the norm to graduate in grade 11 or fifth form. This change takes a toll on people who don’t have the money to afford sixth form, don’t need it to further their future career, or simply just don’t want to do it because it is seen as a waste of two years and money,” argued Johnson.

However, Williams, who was speaking in Parliament on Tuesday, said graduations will be held for the current cohort of grade 11 students, but the school-leaving exercise for fifth-formers will eventually be phased out.

But Johnson was adamant that not all students will benefit from attending sixth form.

“A good number actually regret doing it [sixth form]. It’s really unfair to have to wait two extra years to graduate for literally no reason,” she contended, adding that “this will have an immense negative impact”.

According to the petitioner, this situation will cause an increase in high school dropouts “since plenty of people will decide to just not go and won’t get to graduate.

“There will also be people who can’t afford the extra two years since you have to pay to attend,” she suggested.

Johnson said she had planned on attending the Caribbean Maritime University to study logistics as soon as she graduated fifth form.

But, she said, now she will have to spend “two whole extra years doing basically nothing” because sixth form does not contribute to her desired area of study “in no way, shape or form”.

“It’s just really unfair to have to wait until you’re 19 years of age to graduate. I also think that once an individual has the credits, they should be able to graduate high school,” declared Johnson.

Several other people, especially students, have signed the petition, agreeing with the sentiments of the petitioner.