– Bank is one of the first in the Caribbean to implement Visa Loyalty Solutions, a cutting-edge digital payment platform and loyalty program co-created by fintech and insurtech company novae and leading payment technology company Visa

– With VLS, First Citizens, already a pioneer in Internet banking and mobile banking in Trinidad & Tobago, has incorporated a powerful tool to increase customer loyalty 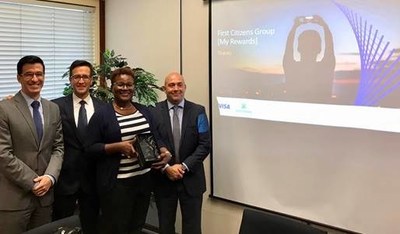 Over the years First Citizens has introduced a number of innovations locally, including Internet banking and mobile banking. It has also been recognized on several occasions for excellence in innovation, communications technology and e-commerce by the Energy Chamber of Trinidad and Tobago.

Thanks to VLS’s single, smart payment solution on an invisible and securely encrypted payment platform, First Citizens clients will be able to register rewards as digital currency that can be used alone or split with other payment methods, such as credit or debit cards registered on the platform, to make payments online and contactless in-store around the world.

novae not only created the technology behind the digital platform, but also the program’s impressive network of international travel rewards, to which First Citizens customers will now have access. A powerful metasearch engine and partnerships with major worldwide travel aggregators enable users to get preferential pricing and exclusive deals at more than 400,000 hotels in 25,000 cities; 70,000 flights to 1,700 destinations on 130 airlines; 500 car rental companies at 30,000 locations in 170 countries; 2 million vacation rental properties in 190 countries; and 10,000 tours and other entertainment options in 90 countries.

First Citizens Group’s VLS Premier Partner designation is the latest of several awards and recognitions the bank has received. The bank was awarded the Best Bank in Trinidad and Tobago by Euromoney Award for Banking Excellence 2016 and also received an affirmed rating of BBB+/A-2 from Standard & Poor’s. Other awards bestowed on the bank over the years include Safest Bank in the English-speaking Caribbean in 2015, 2011 and 2010 (Global Finance Magazine); Best Bank In Trinidad & Tobago in 2015, 2014, 2012, 2010 and 2009 (World Finance); Bank Of The Year 2015 and 2009 (The Banker Magazine) and Bank of The Year in 2009 (Latin Finance).

“As a pioneer in mobile and Internet banking, First Citizens has always offered customers cutting-edge solutions to meet their banking needs. With Visa Loyalty Solutions, they have added a powerful tool in their arsenal to maximize loyalty, boost spend and increase operational efficiency,” said Facundo Mendez, Managing Director of Enterprise, Growth and Loyalty for novae.

Do NOT follow this link or you will be banned from the site!